How to properly play pocket aces 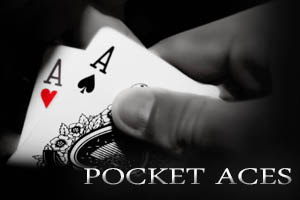 Rarely in competitive games, be it sports or otherwise, does an individual have the drop on his opponents like a poker player pulling pocket aces in a game of Texas Hold’Em. Scoring a pair of aces off the deal puts that player at a massive advantage and – if you’ve got at least a decent poker face – no one else at the table knows about it.

Pocket aces is a powerful weapon but one that can be wasted if not properly played. If you’re overexcited and bet aggressively, you can scare off your opposition. But if played right, you can lure in your foes, watch them build up the pot, then hit them where it hurts most: their wallet.

Here’s some poker strategy to properly play pocket aces to maximize your success:

Don’t smile
The odds of being dealt pocket aces are the same as winning a respectable jackpot at the casino, with a 220-to-1 chance you’ll open a game with twin aces. And just like that jackpot, you want to milk that hand for everything it’s got. First thing is first: don’t let them know you have a great hand. Keep it stoic and under control. And if you’re aware that you have a tell, try to sit on your hands or think about something else before betting gets underway.

Slow play…
Some guys choose to slow play pocket aces while others believe you can miss out on winnings by being too passive. Before picking your strategy, take a look at how some other players are betting pre-flop. If the betting action is moderate, with small bets and minimal raises than slow playing the pot may be best. Bet but don’t bet too much that it tips off others that you’re holding the Michael Jordan of poker hands.

If you notice someone is pushing a little and betting bigger than normal, don’t be afraid to push back. Chances are astronomical that they have the same two-card hole hand than you, so don’t be afraid to flex your muscles. You may scare off some of the other players but could end up wiping out a guy who thinks he’s holding a winning hand.